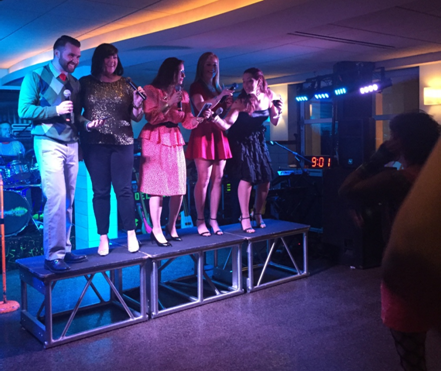 The MG Newbies rocking “Don’t Stop Believing” for our crowd of fans, er…coworkers.

It wasn’t until the Friday before our annual Meridian Group holiday party that I learned I should be freaking out.

We were eating lunch when a co-worker asked me what I thought I’d have to perform in front of everyone at the party. Excuuuuuuse me? Come again?

That’s when everyone started sharing their own horror stories of embarrassment, from the year Kelsey had to sing “Sweet Caroline” a capella to the time Sarah T. repeated a paragraph from “Twas the Night Before Christmas” that had just been read.

It turns out joining Meridian Group isn’t that different from pledging a sorority or playing pranks with bunkmates at camp: there will come a day when you will be asked to publically embarrass yourself in the name of bonding. 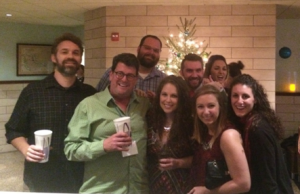 The happy MG Groupie family at our holiday party.

For the week leading up to our holiday party, co-workers were offering guesses on what we might have to do at our 1980’s-themed holiday party, featuring entertainment from none other than Hampton Roads’ favorite cover band, The DeLoreans. As I was driving home on Thursday night to get ready for the party, it occurred to me we probably would have to perform an 80’s song and I might want to take an inventory of all the 80’s songs I know well enough to sing. I came up with approximately one: “Footloose.” (And I probably don’t know all of the words to that song, either.)

That turned out to be a prophecy. I’d barely finished off the last delicious bite of tenderloin in the dining area of the Cavalier Country Club before I heard my name announced over the microphone. All of the newbies – me, Vanessa, Emily, Liz and Grant – were being called to the stage. We were informed we had about 10 minutes to come up with an act, choosing an 80’s song to sing with The DeLoreans as our back-up band. 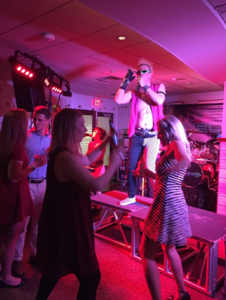 The DeLoreans or actual Billy Idol? It’s hard to tell when you’ve been celebrating.

We huddled in the dining room throwing out song ideas, only to be shot down when everyone else cried, “I don’t know the words!” Vanessa lobbied hard for “Hit Me With Your Best Shot,” while I pushed for “Love Shack,” thinking it would crowd the dance floor. But Grant proved to be the MVP Groupie when he suggested Journey’s “Don’t Stop Believing” – not too long, not too short, fun for sing-alongs, a crowd favorite AND an inspirational message. Done and done.

Armed with liquid courage and lyrics on our cell phones, we climbed on the “stage” of platforms prepared to prove ourselves. I don’t know if it was the amazing backing by The DeLoreans or the killer light show, but by the time we finished, we felt like rock stars. When we shouted the lyrics (likely off-key), we really believed we were Steve Perry. I’m surprised we didn’t drop every single one of our mics at the end.

Joe let us know it was the best newbie performance in newbie performance history. Terry said he wasn’t sure how it could ever be topped. And, not surprisingly, every one else said we got off easy. What can I say? Haters gonna hate.

I like to think we proved ourselves to our fellow Groupies by exemplifying everything working at Meridian Group is about:  we were quick on our feet, creative in a crunch, ready to perform and able to deliver. And at the very least, we might have earned ourselves back-up careers with the area’s best party band!

This post was written by Amber Kennedy, public relations counselor.