Eurasia’s Chef Barry Moves Fast. So do we. 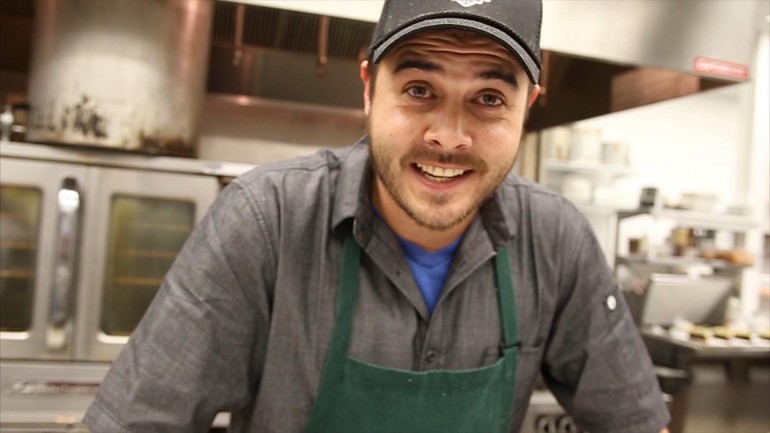 Several times a year, I get to take a little break from the deadline-driven and fast-paced world of car commercials and click my mouse on something a little tastier. Enter Eurasia Café & Wine Bar, a local restaurant with regional flair.

This is the first Wine Dinner video that I edited (another is coming very soon!), and it really shows how much work goes on behind-the-scenes to produce such an outstanding event for Eurasia’s clientele.  Dave Watson, one of Meridian Group’s Creative Directors, shot raw video with two cameras – a GoPro mounted above the prep station and a digital SLR camera on steady cam. He moved around the kitchen frantically dodging chefs, waitresses, dishwashers, and the occasional towering inferno of fire from the grill. We wanted the video to convey not only the amount of work involved, but also the attention to detail and care that goes into every single dish that goes through those swinging doors to your table. 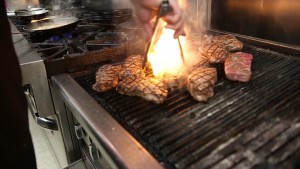 From the perfectly garnished Smoked Whitefish Salad to the crusty sear of the Maple Leaf Duck Breast, and not to mention the stylish take on the old backyard favorite s’mores, everything was presented beautifully, over and over again in rapid succession, yet each plate was treated as its own unique dish. Every dish is not only a work of art visually, but according to Dave, everything was absolutely delicious.

(Wait…Dave gets to sample every course? I need to get in on this shooting thing.) 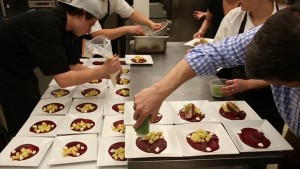 For my part, I had hours of footage that had to be condensed down to around a minute of highlight video. I love the personalities of the chefs at Eurasia, so they usually get featured prominently.  The overhead GoPro footage was a great way to show the assembly line process that is involved, while the SLR footage gets right down and dirty and in the trenches with the food and the staff.

I wanted to try a new editing technique for the GoPro footage this time around, and I think it turned out fantastic. Instead of simply speeding up the video (which shows only one frame per second of footage at this speed and looks sort of jerky), I used two Adobe After Effects filters called Pixel Motion Blur and Force Motion Blur to create a smooth, almost ghost-like effect as everyone moved around the kitchen. While it got me exactly the look I wanted, it took an entire weekend to render. I set the project up to render before leaving work on Friday afternoon, and it was just finishing up on Monday morning when I got to work. My iMac was not happy with all of the stress I put on the processor, but it was well worth it. 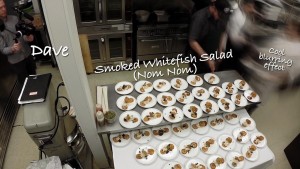 Once I picked out the shots that I wanted to use and sped up the GoPro footage, it was time to edit it all together.  The owner of Eurasia likes hard rocking, driving music, so he picked out a stock music track from a group called The Lions Rampant called 70-30. It was a fun piece of music to edit the video to, and I think it really drives home the frantic pace and hard work involved in producing a dinner like this one.

Dave has already shot the video of the next wine dinner and I’m itching to get my hands on it. And maybe next time, he’ll bring me a doggy bag.

Eurasia “Smoked Out” Wine Dinner from Eurasia Cafe on Vimeo.

This post was written by Meridian Group’s Katie King, Video Editor and Designer. 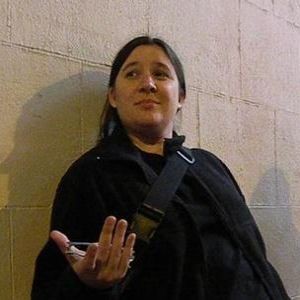