The Journey to Q Redemption 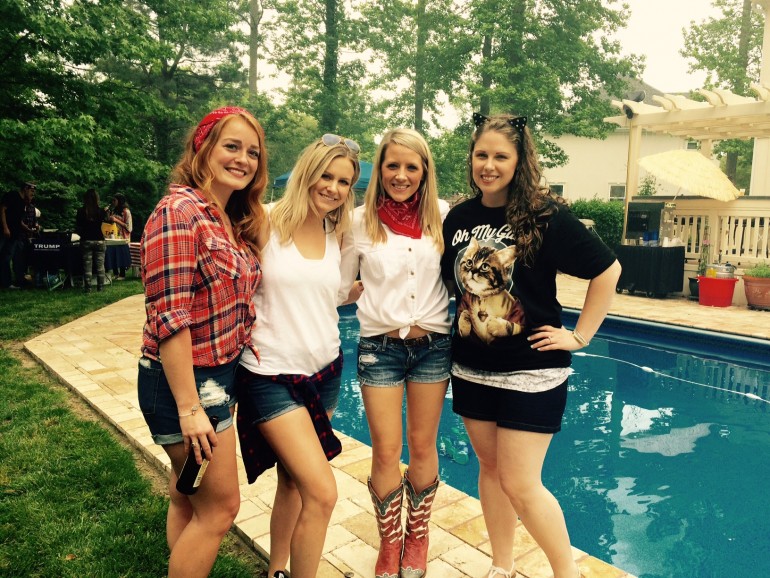 The “worst dish served in Q history” – even a year after last year’s Q disaster, the words still echoed in my head. The truth is, I have a lot of talents, but creating culinary masterpieces is not one of them. Ahead of this year’s big event, I was excited for a day out of the office and the morale boost the competition provides us Groupies, but I was mildly dreading the actual cooking component. I gave fair warning to my colleagues who weren’t at the 2015 Q.

If you’re unfamiliar with the basic concept of the Q, I’ll provide a brief rundown. Each year, Joe selects a Friday in May and hosts a “Chopped” style cooking competition at his house. The day before, five unsuspecting victims are called down to his office at 4:00 p.m. where they learn they’ve been selected as Q captains. I was one of these poor souls last year. The captains choose their teammates dodgeball style and then the rest of the agency meets in the conference room eager to learn what team they’re on and what the year’s required ingredients are. Then the five teams have about 20 hours to come up with a theme (to cook, decorate and dress to), decide on a menu and make preparations for their dishes, tables and outfits. At noon the following day, the Groupies meet at Casa Jose and feverishly prepare their creative masterpieces for four local and highly regarded judges. Oh and hundreds of dollars are on the line, so it gets pretty serious.

This year, I was filled with anxiety on Q reveal day as a couple of coworkers and I rushed back from a client meeting and barely made it to the reveal meeting in time to hear my name called. I was sweating (a usual occurrence when I’m stressed) as it was announced that Emily had chosen me as a teammate along with Liz, Brenda and Kelsey.

“Oh Hell Yeah!” I exclaimed. Killer team. Then, Joe announced this year’s mystery ingredients. Shrimp (cool), ribs (even cooler), hot dog weenies (wait, what?) and strawberries (that’s more like it). We then broke into our respective teams for some intense brainstorming. Our team’s strategy was to divide and conquer each category. Kelsey quickly called the shrimp as she had a solid shrimp taco recipe (that she may or may not have originally gotten from another Groupie. Sorry Jordan!). Liz volunteered to do the ribs. I offered to tackle the strawberries as I have been known to make a mean peach cobbler (thanks to a family recipe – snaps to the good folks down in Alabama!) and thought a strawberry cobbler with ice cream would be simple, but delicious enough. Liz offered to make a strawberry balsamic sauce as a garnish for our sweet treat.

There were still those pesky hot dogs to deal with… we scrolled through Pinterest and Google looking for cool ways to transform hot dogs as we knew a fancily dressed dog or even a corn dog wouldn’t cut it. That’s when it hit me – use the meat from the hot dog weenies as part of the meat base in a chili. The group welcomed my suggestion and then from there built upon it to come up with the idea of chili cheese fries. Brenda was going to handle that. In case you’re keeping tabs, yes, Emily was not tasked with making a dish. We decided she could handle décor and grocery pick ups instead. Great work Captain!

We had our menu set – easy enough. Next was theme. We quickly dismissed Kelsey’s idea of a Hemingway theme as too “basic” (as in, that idea was probably crossing everyone’s mind since there was a financial incentive to use EH Gourmet products in our dishes) and too difficult to pull off. I tossed out the idea of a carnival theme, complete with body glitter and tutus. Also quickly dismissed. Damn, will I ever get to rock a tutu?! I put my brain back to work and came up with the idea for a state fair theme as the ribs, cobbler, and chili cheese fries were a perfect fit. We weren’t sure about the shrimp, but thought we could make it work.

That night, I prepped my cobbler and got my outfit ready. As a former sorority member, dressing to themes is one of my favorite hobbies – still waiting for the year that there’s an award for best dressed. Hint, hint Joe. I mean I got no love for my cool look as part of “Dave and the Bahama Mamas” last year and I made that flower crown myself! 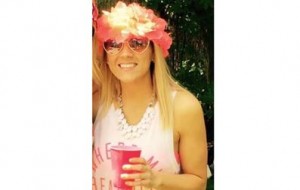 After my attire for this year was set and the cobbler was done cooling, I did a taste test. I could NOT have a repeat of last year. I HAD to ensure it was edible. I took a bite and then another (okay, like five more bites). Thank the good Lord for selfrestraint – I put the cobbler in the fridge for the night feeling good about the next day.

I awoke Friday morning and realized we were still nameless. After bouncing some ideas around my head, it came to me – The State Fair Barba-Q-ties. Following a couple short hours in the office, Emily and I arrived at the Q to find Liz hard at work on the grill. I won’t lie she was kind of an unofficial team captain.

Emily and I’s priorities were as follows: 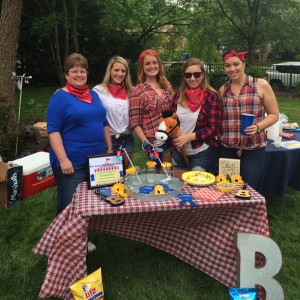 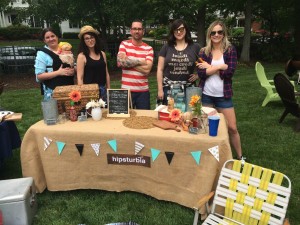 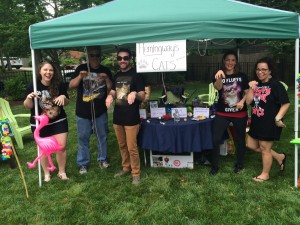 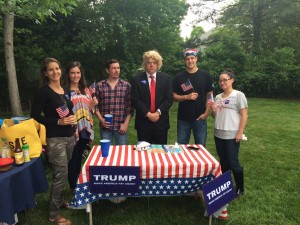 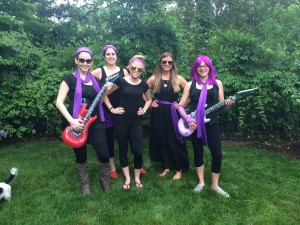 The rest of the team (led by Liz) made sure the prep work was done for our dishes and wrangled us in to help as needed. The judging began around 3:30 p.m. We were up first. We served our “Country Fried Shrimp Tacos” and the judges (Mike Herron of Inside Business, Lorraine Eaton and Judy Cowling of The Virginian Pilot, and Chef Kyle Fowlkes of Cyprus Grille Restaurant) immediately overflowed with positive reactions. One even exclaimed “Joe, you HAVE to try this. It’s that good!” 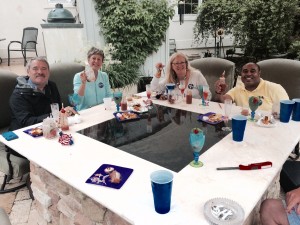 After declaring that we had “set the bar high,” the judges moved on to the next team. We were thrilled. Great way to start! We then got to work prepping our rib creations, the “Pageant Pork Sliders.” I gotta give Liz huge snaps here. She made two different flavors of barbeque from the rib meat – a traditional BBQ flavor that was far from typical and was out of this world and then a chimichurri flavor that was really good, but at first taste seemed sub par to the first flavor. That was until we assembled our sandwiches. We paired the meat with brie cheese and fresh arugula and oh my goodness, it was an absolute party for the taste buds! Again, rave reviews from the judges.

We were feeling good, but I warned folks about being overly confident. We met Brenda in the kitchen to help prep what we declared the “French Fried Chili Dogs.” Once again, the judges delighted in our dish. As they were praising us, Joe told them not to tell us how we were doing and then as Liz and I walked away, we heard a judge say “I can’t help it. They’re kicking ass!”

Woo hoo! Kicking ass?! We were ecstatic! But then the anxiety set back in, my dish was up next. I got my cobbler back in the oven and said a little prayer on the inside that this went well. I did not want to bring the team down with a bad dish. We stuffed large portions of our “Blue Ribbon Berry Cobbler” into mason jars and topped it with ice cream, Liz’s sauce and a fresh piece of mint and marched our tray over to the judges. We then went back to the kitchen and served ourselves the remaining helpings – we had no idea what the full dish tasted like! The judges looked pleased. We took our first bites and… Oh Hell Yeah! It was freakin’ delicious! We were on such a high. 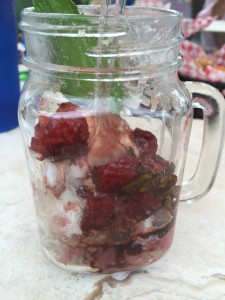 Emily, who had quite a bit to drink at this point (but you would have never known because she holds her alcohol so well #goals) kept exclaiming that we were going to win. Terrified of bad karma, I told her to stop saying that and instructed the rest of our team not to brag to anyone. We had to keep our cool or we’d lose it all.

When it came time to announce the winners, my stress was at an all-time high. I felt confident, but was still nervous. Then one of the judges approached me, asking how I’d cooked the cobbler, because it was the only dish that she finished completely. PTL! as my boyfriend, Landon, would say. Alright, back to results. They came in one by one.

What the heck?! The judges loved all our stuff! We were kicking ass! We aren’t winning anything! I thought for sure we were doomed and then… “the best strawberry dish, with a PERFECT score, goes to the Barba-Q-ties!!!” HOLY SHIT. My dish (okay, yes with Liz’s sauce!) won! And not only did it win, but a perfect score! I was over the moon, but there was still one category left to be announced.

One of the judges declared that this year’s Q champions “consistently provided great dishes throughout the day starting with their first dish and then finished with an amazing dessert,” and then he followed with “this year’s winners are… The State Fair Barba-Q-ties!!!”

Oh. My. God. We won the whole dang thing! Holy muffin! My dish got the best score of the day and our team won the overall Q competition! It felt like I just won the Super Bowl. Where do I sign up for my trip to Disney World? The South has risen again!

Just as we were celebrating, we noticed Joe make his way over to the pool. He got onto the diving board and then yup, you guessed it. That dude threw our $1,000 in prize money into the water before jumping in himself. Luckily, our trusty (and tispy) team captain, Emily, jumped in and recovered the wet cash. After the $200 donation we’re making to the Virginia Beach SPCA, we all walked away $200 richer and with a whole lot of pride.

From the worst dish in Q history to this. I guess this is what Drake means when he says “started from the bottom, now we’re here.” 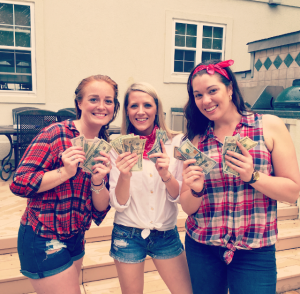